If you have a tree story to share, please e-mail your story and/or image(s) to faketure@gmail.com
Thank you for your support.

WOODVILLE, Miss. - Family members say a man found Friday hanging from a tree in rural Mississippi had returned home to fight for his family's land. The body of 52-year-old Roy Veal was discovered in Wilkinson County, relatives said. Warren Strain, spokesman of the Mississippi Department of Public Safety, said the body was discovered about midday in a wooded area of the county near Woodville. Authorities declined to identify the man pending notification of relatives. But Doris Gordon, a Woodville native now living in San Francisco, said the victim was her brother, Roy Veal of Washington state. Thelma Veal, the man's mother, also confirmed the identity.
"They found my brother hanging from a tree with a hood over his head and some papers burned at his feet," Gordon said in a telephone interview with The Associated Press from San Francisco. "It's awful. We don't know who did it." Gordon, who said she would be returning to Woodville as soon as possible, said her brother had returned to the family home in Wilkinson County "to help with a lawsuit pending against our family." "There are people trying to take part of our land because they apparently think there is oil on the land," she said.
Officials at the chancery clerk's office in Woodville said a lawsuit pending in chancery court names several members of the Thelma Veal family, including Doris Gordon and apparently Roy Veal, as defendants. Chancery Clerk Thomas Tolliver Jr., said the case involved title to land in the county and damages. Thelma Veal said the lawsuit sought portions of land owned by her late husband and his brothers. She said her son had obtained a map of the property and was collecting documents to prove the family owned the land. "Now they have found my son hung back there on a tree," said Thelma Veal, 79. She said her husband owned more than 40 acres in the area southwest of Woodville and that it was being sought because it might have oil deposits. There is oil production in that area of the state. "My husband's daddy bought this land in 1926 and I've been here ever since I was 18," she said. "It's our land." Strain said the Highway Patrol's Bureau of Investigation was looking into the circumstances around the death. County Coroner Travis Sharp said he had not been contacted about the death and the sheriff's department declined any comment when contacted Friday.
Posted by Gabriel Akagawa at 9:16 PM 11 comments:

In October 2003 I went to a friend's wedding in Hawaii. He and other friends very generously sponsored some of us poorer folk who otherwise couldn't have afforded to go. Perhaps that made me feel more generous of spirit myself.

Anyway, the house where we stayed had a lot of coconut palm trees on the property. One good friend (and one of my sponsors) pulled me aside and asked me to take some photos for her. She pointed at one of the trees, and said that she wanted a photo of that tree as a gift for the groom. 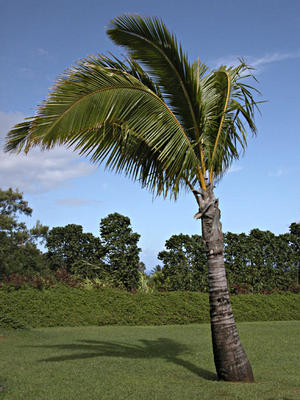 I asked her what it was about the tree that interested her. She paused for a moment, then said that it was something about how it changed its shape in the wind, but overall retained the same form, and that she found that quality somehow important, or at least related, to how she felt about the groom. 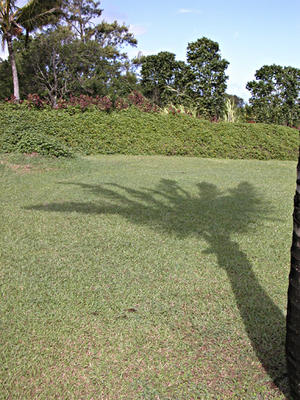 Then we looked more, and she noticed the tree's shadow on the ground. We then discussed that maybe the shadow was more interesting than the tree, that the shadow seemed to hold some quality of memory, perhaps it is a print of the object, the way a memory is a kind of print of an experience. She asked me to take some photos of the tree's shadow as a gift for our friend. We talked about shooting video of the shadow, how it came and went as the sun filtered through the clouds. She declined, saying the stills would be enough. So I shot many photos, and will mail the CD to her tomorrow.
Posted by Gabriel Akagawa at 8:04 PM No comments:

It could also be a hair story

He was noted for his personal beauty and for the extra-ordinary profusion of the hair of his head The first public act of his life was the blood-revenge he executed against Amnon, David's eldest son, who had basely wronged Absalom's sister Tamar. This revenge was executed at the time of the festivities connected with a great sheep-shearing at Baal-hazor. David's other sons fled from the place in horror, and brought the tidings of the death of Amnon to Jerusalem. Alarmed for the consequences of the act, Absalom fled to his grandfather at Geshur, and there lived for three years.

David mourned his absent son, now branded with the guilt of fratricide. As the result of a stratagem carried out by a woman of Tekoah, Joab received David's sanction to invite Absalom back to Jerusalem. He returned accordingly, but two years elapsed before his father admitted him into his presence.

Absalom was now probably the oldest surviving son of David, and as he was of royal descent by his mother as well as by his father, he began to aspire to the throne. His pretensions were favored by the people. By many means, he gained their affection; and after his return from Geshur he went up to Hebron, the old capital of Judah, along with a great body of the people, and there proclaimed himself king.

The revolt was so successful that David found it necessary to leave Jerusalem and flee to Mahanaim, beyond Jordan; where upon Absalom returned to Jerusalem and took possession of the throne without opposition.

Ahithophel, who had been David's chief counsellor, deserted him and joined Absalom, whose chief counsellor he now became. Hushai also joined Absalom, but only for the purpose of trying to counteract the counsels of Ahithophel, and so to advantage David's cause. He was so far successful that by his advice, which was preferred to that of Ahithophel, Absalom delayed marching an army against his father who thus gained time to prepare for the defense.

Absalom eventually marched out against his father, whose army, under the command of Joab, he encountered on the borders of the forest of Ephraim. Twenty thousand of Absalom's army were slain in that fatal battle, and the rest fled. Absalom fled on a swift mule;

BUT HIS LONG FLOWING HAIR WAS CAUGHT IN THE BOUGH OF AN OAK,
and there he was left suspended till Joab came up and pierced him through with three darts.

His body was then taken down and cast into a pit dug in the forest, and a heap of stones was raised over his grave. When the tidings of the result of that battle were brought to David, as he sat impatiently at the gate of Mahanaim, and he was told that Absalom had been slain, he gave way to the bitter lamentation:
"O my son Absalom, my son, my son Absalom! would God I had died for thee, O Absalom, my son, my son!" (2 Sam. 18:33. Compare Ex. 32:32; Rom. 9:3).

Those Brilliant Fall Outfits May Be Saving Trees

Posted by Gabriel Akagawa at 6:50 PM No comments:

The Wedge Project at Wood Street

From October 15th through the 17th at Wood Street Gallery in Chicago the TREE-OSK will be exibited. As a part in the Connecting the Ages group show, the TREE-OSK sets up an exchange: take a wedge, leave your name and/or e-mail adress. Each wedge has http://treestories.blogspot.com stamped on it. This project further explores modes of connectedness between people, nature, objects and ideas.

For those of you who have a http://treestories.blogspot.com wedge, please feel free to e-mail treestories@hotmail.com or upload a photo or story about the wedge's new role in your life.
Posted by Gabriel Akagawa at 9:28 AM 2 comments:

I had just moved into this house. At 5.30 am I could see police lights swirling around through my windows. I wondered what sort of neighbourhood I had moved into. There was a knock. My neighbour. Two young lads about 16 had swerved off the road and into the tree at the top of my garden. One was sitting next to the rear wheel. The other was talking to 3 policemen. They were soooooo drunk. The guy sitting couldn't actually stand and he had been driving. I had slept through most of it! They had swerved, hit the tree, reversed, then tried to take off and the exhaust pipe had caught in the concrete and they couldn't go forward. The neighbour had rung the police. I was told not to interfere by the police (but it's my tree and my garden and these boys are drunk!) . The really drunk one was taken away and the other was left to get home?! I brought him inside and we waited and waited and waited till his Dad turned up. My husband had not moved the entire time! Totally beneath his dignity. The young lad came back the next day to ask if he could fix my garden. It had been sprayed by the tires to the other side!! All my new plants. But the boys were not hurt. 6 months later I had to have the tree taken down because it was dying and couldn't be saved. Some wake up call!

Posted by Gabriel Akagawa at 7:53 PM No comments:

Join the March!
This effort cannot succeed without your important help. It will only
take a few minutes of your time. Your participation in the Earth Day
Virtual March will demonstrate to your elected representatives that they
should be working to protect wildlife, its habitat and the environment
we share, not casting votes to help special interests.

You won't have to come to Washington. Or stand in the rain. Just join
the virtual march and on Earth Day, we'll send your message to your
Senators about their recent Senate vote and urge them to keep the
Arctic National Wildife Refuge off limits to destructive oil drilling
for good. Together we can send a powerful message to the politicians
that they cannot ignore.