If you have a tree story to share, please e-mail your story and/or image(s) to faketure@gmail.com
Thank you for your support. 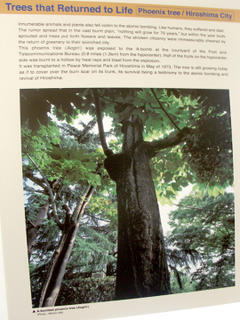 Click on picture for larger image.
Image from the Peace Musem, Chicago, IL.
Posted by Gabriel Akagawa at 10:20 AM No comments: 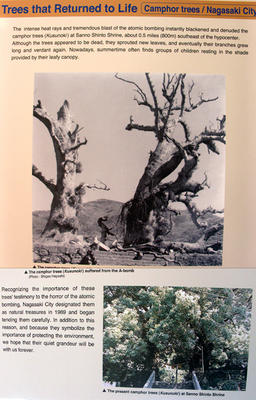 Click on picture for larger image.
Image from the Peace Musem, Chicago, IL.
Posted by Gabriel Akagawa at 9:29 AM No comments:

I was listening to NPR this morning and they had a strange tribute to Dogwood trees. The woman telling the story decided to determine what kind of song Dogwoods sing. Anyway, it quickly turned into comparing the trees to woman and the simple arraignment of the Dogwood making other trees, like a cherry, look like a "tart". As I pondered the ridiculousness of calling trees whores I thought about our need to map ourselves and our cultures onto to nature. The I thought, your projects are more about mapping nature on to us. I think this may be why Darwin is so feared and hated. He proved that we follow natures rules, not the other way around. This is similar to an interpretation of the Book of Job. There, Job, the super-righteous man, suffers heaps of troubles--his whole family dies, he looses all his wealth, he gets boils--and as he's sitting on the road covered in welts and dust his friends try to convince him that he must have done something wrong because God doesnt punish the righteous. Finally, God gives an "answer" to Job's lament by spending many chapters describing the magnificance of his creation: nature. So, Job asks, why do the righteous suffer and God answers, arent waterfalls amazing. A scholar, whose name escapes me, who believes that God is making the point that all the human, Job included, in the story are acting on the assumption that nature should follow the rules of humans, eg fairness and justice. When, in fact, nature follows its own rules: sometimes there's rain in the desert and none on the farm.

by Anne Knafl
Posted by Gabriel Akagawa at 7:33 PM 4 comments: